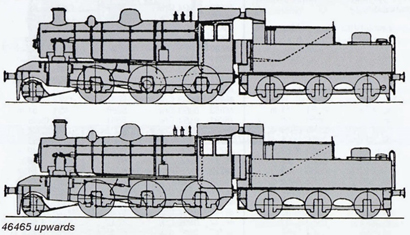 The hundred and twenty eight of the tender engines were built, only twenty of which appeared before nationalisation. The design was later adopted as a BR standard design appearing as the 2MT 78000 class in 1952 whilst members of the 46400 class was still being built. Most of the class was based on the London Midland Region but some were based on the Western, Eastern, North Eastern and Scottish Regions.

46400-46464 carried short LMS style chimneys whilst 46465 onwards had BR tall Parallel type chimneys. 46424 was experimentally fitted with a narrow stove pipe chimney in 1951 and it was nicknamed “The Sprout”.

The original LMS engines had a smaller lower pitched boiler and a lower running plate than the BR built engines.

In 1952 46460 was transferred to work on the St Combs Light Railway in Scotland and it was fitted with a cow-catcher which was previously attached to the LNER F4 engines which had worked on the branch.

Allocation of locomotives in service as at 1st of January

Only 46428 has yet to steam in preservation.