The two foot three inch gauge Corris Railway was built in 1859 and ran from Mchynlleth north to Corris and on to Aberllefenni to service local slate quarries. Originally the line was horse-drawn, but three identical 0-4-0ST locomotives numbered 1- 3, were ordered from Hughes’ Loco & Tramway Eng. Works Ltd of Loughborough. Between 1883 and 1900, the locos were fitted with trailing pony trucks, converting each of them into an 0-4-2 ST.

4 was purchased in 1921 from Kerr, Stuart & Co. Ltd to replace the condemned locomotives.

During the 1920s locos 1 and 3 were dismantled, “cannibalised” and rebuilt as a single loco using the best parts of each, with the resultant loco carrying the number 3. As a result loco 1 was withdrawn as life expired in 1923; meanwhile 2 remained intact and available in reserve until 1928.  At the end of the 1920s negotiations began to sell the Corris Railway to the Great Western Railway and a report dated 12 October 1929 stated that locos 1 and 2 had been “marked off for some time as scrap”; they were handed over to a local scrap merchant and excluded from the assets taken on when the purchase was completed on 4 August 1930.

In the Great Western period the line was largely dependent on the slate output of Aberllefenni Quarry, which from 6 April 1935 was leased by the local Member of Parliament, Sir Henry Haydn Jones.  His support for rail transport for the quarry’s output was critical in keeping the railway open up to and including World War Two; without this support it is likely that the railway would have closed and the locomotives been scrapped. 3 was still working when the Corris came under the control of British Railways following Nationalisation in 1948, but operation under this organisation proved short-lived as the last train ran on 20 August that year.

It was acquired by the GWR in 1930. 3 was a survivor of the original three locomotives bought by the Corris Railway. 4 was bought in 1921 when the other two locomotives were condemned.

The Talyllyn Railway was built in opened in 1866 and ran from Towyn (now spelt Tywyn) to the slate quarries of Bryn Eglwys, only a few miles from Corris. It was built to the same gauge as the Corris Railway, but unlike that line used steam traction from the start. The line and quarries were bought by Sir Henry Haydn Jones in 1911. The venture made little money, but despite the closure of the quarries in 1946, Haydn Jones continued to operate the railway at a loss until his death in 1950.

That same year a group of enthusiasts had looked at the possibility of operating the railway on a volunteer basis. With the agreement of Haydn Jones’ widow a deal was made, and control of the railway passed to the newly formed preservation society. One of the major problems facing the railway was the lack of motive power; the railway owned two locomotives, the first of which, Talyllyn, had been out of service for some years, and the second, Dolgoch, was in need of a major overhaul. The society therefore approached British Railways to attempt to purchase the two remaining Corris locos, and successfully negotiated to purchase them at £25 each. 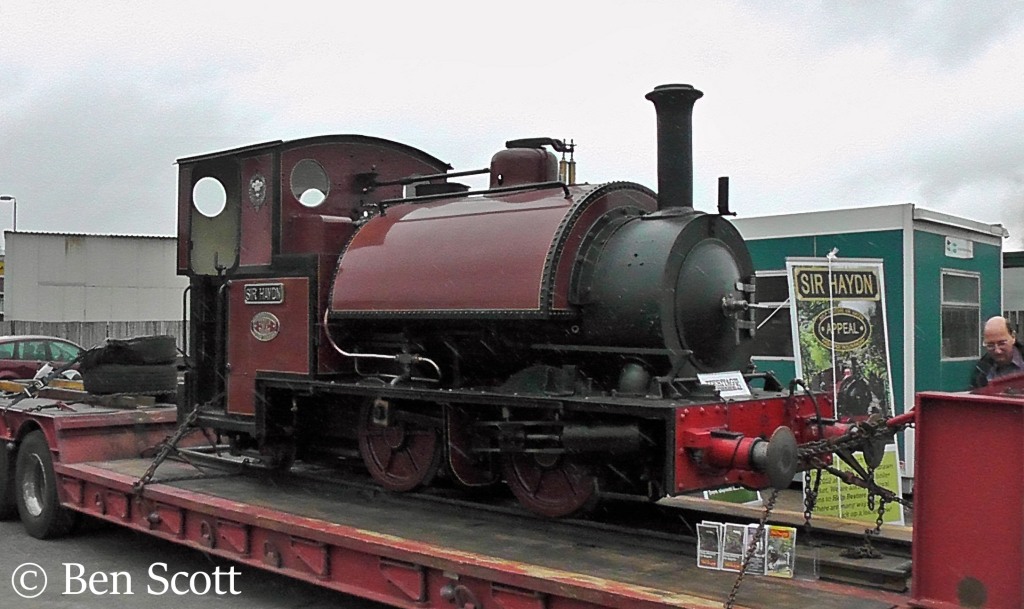 3 had been unnamed on the Corris, but received the name Sir Haydn upon arrival on the Talyllyn Railway, after the former owner of the railway; it seems that at that time it was not appreciated the crucial role Haydn Jones had played in keeping the Corris line running in the 1930s, which had played an important part in ensuring the locomotive’s survival. Along with 4, it kept its Corris number, giving both locos the unusual distinction of carrying the same number though the ownership of four different railway companies (the Corris, Great Western, British Railways and Talyllyn Railway). Because both railways were built to the unusual gauge of 2 ft 3 in (686 mm) it was relatively easy to adapt the Corris locomotives to work on the Talyllyn Railway. Sir Haydn became the first new locomotive to travel on the railway for over 90 years. Upon arriving Sir Haydn was the engine in better condition but frequently derailed however and could not be used safely. Upon inspection it turned out that the Talyllyn track was laid approximately 0.5 inches (13 mm) wider than the official gauge, a deliberate policy by the old company to accommodate the long wheelbase of Talyllyn. The two original Talyllyn locomotives had unusually wide wheel treads that allowed them to stay on the wide-of-gauge track. This problem was eventually cured by the fitting of wider wheel treads and by a Territorial Army members’ exercise in 1953 relaying the railway to its correct gauge making Sir Haydn usable. The original cab was replaced in the 1960s.

The Corris Railway was reopened to passengers in 2002, and 3 returned there in June 2003 for a month of running trains to celebrate the railway’s rebirth. It returned again at the end of April 2012 to run a series of special trains before the expiry of its boiler certificate in May, and remained at Corris until 24 April 2013 when it commenced a tour of various railway sites in England to help raise funds for its overhaul.

The Corris Railway is currently constructing a new locomotive based on the design of 3.

In 2017 the locomotive was undergoing overhaul at the Aberystwyth works of the Vale of Rheidol Railway.

4 entered service on the Talyllyn in 1952 and has proved most successful. From 1958 until 1969 a Giesel ejector was fitted instead of a conventional chimney, the first such installation in the British Isles.

Until 2000 the loco was running in the guise of “Peter Sam”, in red livery. It was then repainted into British Railways black, the colour scheme it might have acquired had the Corris line survived a little longer. An extensive overhaul, which has included the fitting of a new boiler, was completed in late May 2004 and the loco returned to public service on Sunday 30th May as “Edward Thomas”, in unlined green livery. The locomotive is now running in the standard TR livery of deep bronze lined with black borders and yellow lining.

Back to Narrow Gauge