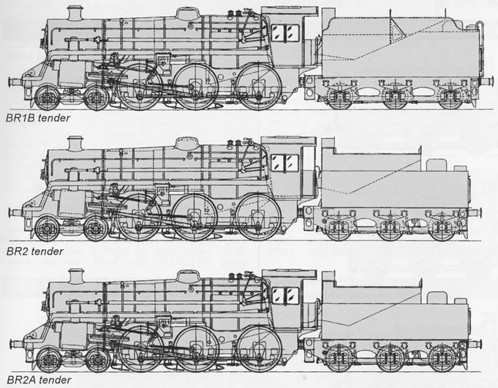 These locomotives were designed for cross-country and secondary passenger work. They are a smaller version of the Standard class 5 73000 locomotives and as they are weigh lighter they had almost universal route availability over main and secondary routes throughout Britain. Eighty of these engines were built at Swindon and they were based on the London Midland, Western and Southern Regions, including such routes as those of the former Cambrian Railways.

They were essentially a tender version of the Standard 4 2-6-4T, with similar characteristics to the GWR Manor class, though unlike the Manors they were built to the universal loading gauge. They used the same running gear as the tank engine (with the leading bogie from the Standard class 5), and substantially the same firebox, smokebox and boiler, although the boiler barrel was increased in length by 9 inches.

From 1957 some locomotives (including all those allocated to the Southern Region in 1960 and 1961) were fitted with double chimneys.

Allocation of locomotives in service as at 1st of January.