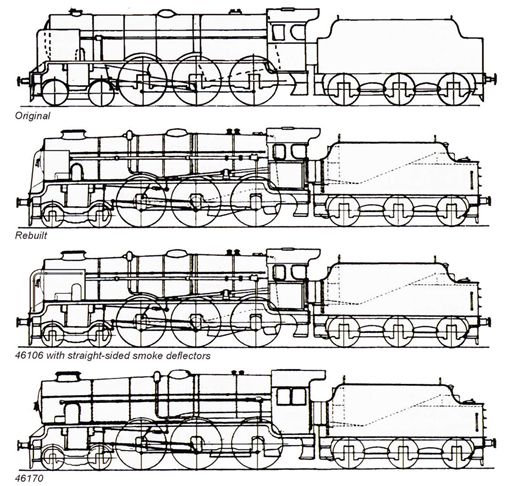 Until the mid-1920s, the LMS had followed the Midland Railway’s small engine policy, which meant that it had no locomotives of sufficient power for its expresses on the West Coast Main Line. These trains were entrusted to pairs of LMS/MR Midland Compound 4-4-0s between Glasgow and Carnforth, and a 4-6-0 locomotive of the LNWR Claughton Class, piloted by an LNWR George V 4-4-0, southwards to Euston.

The Operating and Motive Power Departments of the LMS were satisfied with the small engine policy but in the late 1920s the LMS found itself facing an urgent need for large express traffic engines for the West Coast main line. The 5XP (46004) Claughton class had never really proved themselves and the 5P (50412) Hughes engines which had been imported from the LYR did not really solve the problem.

In the autumn of 1926 the Chairman of the LMS (Sir Guy Granet) and the General Manager of the GWR (Sir Felix Pole) met for lunch out of which appears to have come the decision to “lend” the LMS 5000 Launceston Castle (GWR Castle class) for a month of trials on the West Coast Main Line between Euston and Carlisle. At this time the LMS faced disagreement between the CME (Fowler) and other departments which was causing many problems. This loan would have been an affront to the LMS CE Fowler who had been told to stop work on a major project (building a compound pacific express locomotive) which had previously been authorised. As expected the Castle performed very well and as a result Fowler was instructed to produce 50 4-6-0 engines that were comparable with the power of the Castle locomotive built for the summer traffic of 1927.

Fowler approached the GWR enquiring about the possibility of having fifty Castles. The GWR did not have the capacity at Swindon for building “export” Castles as well as its own, and was not willing to release the plans of the Castles to the LMS.

The nearest equivalent to the required locomotive required (other than the Castle) was the Southern railway E850 Lord Nelson which had only been completed in the August of 1926 and it was nearly two years before the second of Lord Nelson class was produced in June 1928. After appeals to Maunsell the Chief Locomotive Draughtsman at the LMS (Herbert Chambers) went to Waterloo and had discussions with Southern Railway engineers. Following this a complete set of the drawings of Lord Nelson were sent to the North British Locomotive Company at Glasgow.

The Derby drawing office and North British staff collaborated in designing the class, with the latter producing the working drawings. Fowler took little part in the design process, which was carried out by Herbert Chambers, Chief Draughtsman at Derby, and his staff. The LMS was impressed with the Lord Nelson design but it was decided to go for three cylinders instead of four but used the Lord Nelson design for the firebox.

The main features of the design followed existing Derby practice, with the cylinders and valve gear being derived from the Fowler 2-6-4T, also being designed at Derby at that time.

Because there was an urgent need for the new express locomotives the LMS placed an order with the North British Locomotive Company of Glasgow for 50 engines. The North British, with its extensive drawing office and two works, possessed sufficient capacity to expedite the order within a year. The North British Locomotive Company was created in 1903 through the merger of three Glasgow locomotive manufacturing companies; Sharp, Stewart and Company (Atlas Works), Neilson, Reid and Company (Hyde Park Works) and Dübs and Company (Queens Park Works), creating the largest locomotive manufacturing company in Europe and the British Empire.

The North British Locomotive Company submitted its quote for producing the locomotives on 7th December 1926 -less than a month after the end of the trials with the 5000 Launceston Castle. Construction of the fifty engines was shared equally between the Hyde Park and the Queen’s Park Works. The contract price was £7,725 per engine and delivery was to commence 25 weeks after placing of the order with completion after 35 weeks.

The order was placed on 7th January 1927 which resulted in the schedule delivery for the first engine being 2nd July just a week before the summer service commenced on the 11th July.

Fifty engines were ordered straight from the drawing board from the North British Locomotive Company, the first being delivered in July within eight months of the order being placed and all fifty were in service by the middle of 1927.

Considering the speed with which they were designed and constructed they proved to be very successful engines. Twenty more were built at Derby in 1930.

The locomotives proved to be taking a 420 ton train unaided over Shap and Beattock as part of a long through workings between Euston and Carlisle (299 miles) and Crewe and Perth (292 miles).

After introduction the locomotives began to show alarming increases in coal consumption which was a major issue on the long runs they were scheduled to undertake. One engine had modified piston valves fitted which resulted in the coal consumption falling from 70lb per mile to 35lb per mile. The other members of the class were then modified.

In 1933 the LMS was invited to send a locomotive and train to the Century of Progress International Exposition in Chicago, USA.It was decided to send an engine of the Royal Scot class, and one was selected that was due for general overhaul. The identity of this locomotive was 6152 The Kings Dragoon Guardsman. The coupled axleboxes were replaced with larger ones, based on a GWR design, and the bogie replaced by a De Glehn type, also derived from GWR practice. Springs and spring rigging were also updated, and the boiler replaced. The rebuilt locomotive assumed the identity of 6100 The Royal Scot with (on its return from the USA) an enlarged nameplate with details of its appearance at the exhibition. It retained this identity after its return from the USA. Whilst in America the engine went on an 11,194 mile tour of North America including crossing the Rockies.

6125-6149 were originally named after old LNWR locomotives. The brass nameplates carried etchings of the locomotives represented. In 1935-1936 these names were replaced by regimental names bringing them in line with the rest of the class. 46112 Sherwood Forester had its nameplate removed in 1961 as a diesel (Peak class D100 later 45060) took its name. The nameplates of 46127 and 46170 were unusual in that they took the form of a brass replica badges, rather than more conventional nameplates.

An experimental version of the design was built in 1929 with a very high boiler pressure of 900psi.It was numbered 6399 Fury and it was a three cylinder compound built by the North British Locomotive Company. During trials a burst tube caused the death of a travelling inspector on the footplate and the engine never entered normal service. In November 1935 it was rebuilt with three simple cyinders and a taper boiler. The boiler did not prove as successful as the boilers later fitted to the rebuilds which were shorter, but it was later fitted with a double chimney which greatly improved the steaming. It was later renumbered 6170 and renamed British Legion.

As a result of the successful rebuilding of the two Jubilee 7P class engines (45735 and 45736) in 1942, under the auspices Stanier introduced a rebuilt version of the Royal Scot class. As Stanier was then engaged on war work, and so was actually undertaken by George Ivatt and E.S. Cox.

The entire class was rebuilt with larger taper boilers, double chimneys and new cylinders between 1943 and 1955. The rebuild was quite substantial, requiring new boiler, frames and cylinders. But in most cases the original frame stretchers, wheels, cab and fittings were retained. The usual procedure carried out was that as each locomotive arrived for rebuilding, it was stripped and the identity transferred to a fresh frameset prepared using the parts recovered from the locomotive that had previously been re-built. The new frames were slightly shorter than the originals. Thus, most rebuilt examples retained their own cab, wheels etc., but most of the frame stretchers, and other integral parts of the frame were from the previously re-built locomotives.

They were also later fitted with smoke deflectors from 1947 onwards. In this form they were some of the finest 4-6-0 engines ever known, although they were inclined to be rough riders.

46106 was fitted with straight-sided smoke deflector plates of the type used on BR standard locomotives.

The class title of Royal Scot was subsequently re-used in 1976 as an official name for the then-new Class 87 electric locomotives, but it never stuck, partly out of respect for the original fleet

Number Rebuilt as 7P in Service.

Allocation of locomotives in service as at 1st of January.