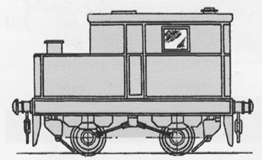 All of the Big Four companies performed trials of the Sentinel C.E. (Centre Engine) type, but the LNER used them the most prolifically. The C.E. locomotive was based upon their steam road lorries, using the same type of vertical boiler, and a similar chain drive to the wheels. The trials showed that the Sentinel C.E. was capable of drawing a constant drawbar over a distance. This was due to the chain drive. The chain drive was also advantageous because it did not produce a hammer-blow to the track – unlike a traditional steam locomotive “motion”. As such, it was considered ideal for work on small branches and yards where the track may not have been of a high standard.

The engines had poppet valves and reversing was by sliding camshaft. The advantage of the water-tube boiler was that steam could be raised much more quickly than with a conventional fire-tube boiler.

These shunting locomotives only consumed about 15lb of coal per mile. As such a batch of 20 were ordered in 1930 instead of a further 20 class J72 0-6-0Ts, on grounds of efficiency.

Due to their slow speed, the Y1 and Y3 shunters were rarely used to haul trains. Instead, they proved particularly useful shunting in small yards where there was insufficient work for a larger locomotive. Another advantage was that they could be operated by one person.

Many engines were used as service locomotives at various locations. Their small size made them ideal for this type of duty.

The class was split into several parts which differed in such detail as the size of the boilers and fuel capacity.

Class members of the designation Y1/2 were purchased between 1927 and 1929. Totalling 15 in number, these are probably the closest to a standard Y1. They only weight 19 tons 16cwt. Although lighter than a Y1/1, they had a larger boiler and an increased coal capacity of 16cwt.

The only locomotive of the Y1/3 class was built in 1926, but purchased by the LNER in 1929. Originally built to a Y1/1 design, it was built for the Hull Victoria Dock. In order to comply with total weight requirements, the ballast weight was removed. Weighing only 14 tons, the lack of weight upset the balance. As it was only going to be used for shunting, this was deemed acceptable.

The Y1/4 locomotive was built in 1927 and was similar to a Y1/1, but the weight was reduced to 19t 7cwt, and the coal capacity increased to be comparable to that of the Y1/2.

Most were withdrawn from service in the late 1940s and 1950s, with a seven surviving as department stock into the early 1960s.