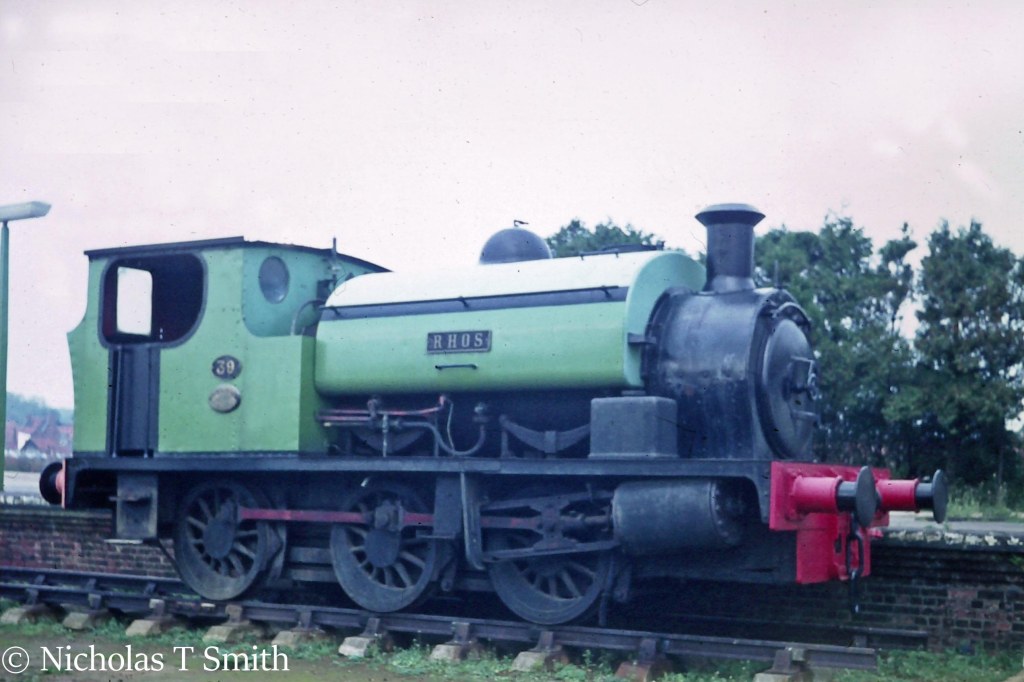 This locomotive was built by Hudswell Clarke following an order placed by Lloyds Ironstone Co  in November 1917.

It was delivered new to their quarries at Corby in January 1918 where it replaced older smaller locomotives. It was part of a second generation of locomotives at Corby, where quarrying became more distant and mechanised to meet wartime production needs. These required longer and heavier journeys and it was therefore built with a full mechanical lubrication system.

It differed from the standard Hudswell Clarke by having large sliding rear cab windows and modifications on the buffer beam for buckeye couplings to work quarry dumpcars. Side check chains were also fitted for working man-riding tool vans. It became No 39 in the Corby fleet, with a large cast oval plate on the cab side and carried a standard green and black livery with red side rods.

It spent almost its entire working life at Corby, except for a spell at Harringworth quarries between 1933 and 1935. It was also employed at the nearby Glendon East quarries from January 1952 until 1957. It returned to Corby and ended its working life for Stewarts & Lloyds (Minerals) Ltd on track work trains.

Lloyds Ironstone Co was absorbed into the Stewart and Lloyds Company and subsequently with the nationalisation of the steel industry it came under the ownership of British Steel.

The locomotive holds the distinction of being the last steam engine to receive a full overhaul in Corby Works in 1963, where it was rebuilt with a new boiler, new wheel centres and tyres to replace worn out components. Later service at Corby was characterised by dumpcar overburden service and tool van trip working. RHOS also headed an Industrial Railway Society visit to Corby in the late 1960’s.

After diesel locomotives took over the quarry work, it left Corby for preservation in July 1968. Initially this was with A. B. Mason of Burnham Market, Norfolk. It was resold in 1981 to Mr D A Miller of Downham Market, Norfolk where it stayed until it was acquired by the late Gerald Boden. He brought it to Cottesmore in February 1988 for storage, before it was transferred to the Nene Valley Railway in April 1992

At the Nene Valley Railway it was partly dismantled to allow restoration to commence, but it has never steamed in preservation although it was in reasonably good condition, with most parts present, including the original cabside number plate.

After its stay at the Nene Valley Railway it was finally transferred back to the Cottesmore museum in September 2011 in a dismantled state. The chassis was immediately placed in the workshop, where restoration recommenced, whilst other parts have been stored on and off site.

To enable it to be purchase from the Boden family in 2011, it was initially bought by the Rocks by Rail museum, using funds from the sale of another locomotive. Ownership was then transferred to the “1308 Trust”, a group comprising several Rocks by Rail members specifically to preserve and restore the locomotive. Their payment by instalments was completed in 2013 and they all became shareholders.

As an extremely relevant locomotive for the museum it was intended to join the emerging operational fleet of locomotives at Cottesmore, owing to its suitability for both quarry and passenger traffic. Restoration works commenced on the chassis, which was cleaned and painted, and the wheels were turned to the correct profile. However, a large crack was found in the cylinder block which will require special treatment.

Unfortunately, further work on the locomotive ceased in 2016, following the death of one member of the group, and other shareholders deciding to leave the project.

With no other works currently planned, a decision on its future it is still awaited.

Back to Hudswell Clarke

Back to Industrial Locomotives